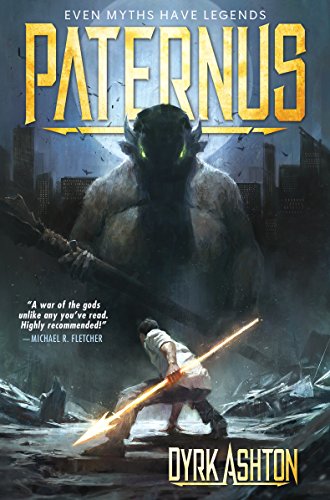 Fiona and Zeke, two normal teenagers, are swept into a war between the gods and devils of ages past. Being hunted by supernatural enemies, can they survive? And what part does the catatonic man Fi has been caring for, play in the whole thing?

I loved this book.

I could probably stop there; after all, what more would you need to say? Well, why did I love it?

The level of detail and the amount of research into various world mythologies and religions must have been exhausting but it pays off, giving Paternus a level of history and authenticity that draws the reader in completely.

As it begins the novel follows several lines of narrative. Some focus on the beings that have lived among us for millennia, on both sides of the unseen struggle that forms the background of the novel. Another concerns the two young people; Fi and Zeke, who have been teetering on the verge of a relationship, when their lives are abruptly turned upside down.

Both Fi and Zeke are excellently drawn, their thoughts and feelings easily recognizable and understood, even as they are drawn deeper and deeper into the world of the Firstborn. Their story is the core of the novel,at first told through alternate chapters, until the third act when the focus is purely on them.

The third act also features a sustained set piece, with the small and beleaguered heroes under siege by a seemingly non-stop array of foes. The action is fluid, visceral and the suspense of these chapters is cranked up again and again. In fact, there are a number of battles between the godlike Firstborn during the book, all with their own methods, but each scene flows smoothly, placing the reader at the centre of the action.

The dialogue is well handled throughout; some times amusing, always realistic. And, for a novel that contains so much backstory and world building, I don’t recall a single piece that felt like an info dump. No mean feat.

I can’t recommend this book highly enough and eagerly await the next installment.